Table of Contents
1) Accent VS Accent Mark
2) What are Accent Marks?
3) Spanish Accents Marks
4) When to use a Spanish Accent?
5) What is the Spanish Diacritic Accent?
6) Spanish Letters
7) Upside-Down Punctuation Marks

Those learning Spanish will undoubtedly run into the varying Spanish accents used in different regions and parts of the world — particularly if you travel to Spanish-speaking countries.

And then there’s the always confusing written language, with its accent marks and idiosyncrasies that can make it confusing for English speakers.

This guide runs down confusion Spanish accents and clears up the confusion surrounding the accent marks you see on certain letters in the Spanish alphabet.

An ‘accent’ is generally understood as a group of phonetic, rhythmic, and melodic characteristics of a spoken language within a group of people. An accent-style is associated with a nation, a culture or social class.

For instance, Castilian is spoken in Argentina, México, Philippines, Spain and Uruguay. However, the tone and manner of speaking differ from one country to another.

In addition, diverse accent-styles can be found in the same country, such as a variation between a posh lady and a construction worker from Mexico.

The accent-style could be easily confused with an accent mark, which is an orthographic sign, because quite often Spanish speakers use the same word ‘acento’ for the two different concepts.

The best way to learn the accent-style of a particular language as well as its spelling rules is to acquire it from a native Spanish speaker certified teacher. Accomplishing a true Argentine, Mexican or Spaniard accent will propel your Spanish language skills to another level.

What are Accent Marks?

Thus, we can say that accents marks are orthographic symbols used on letters that help emphasize the intonation of a word when speaking a particular language; they give a distinctive stress to a syllable in speech.

Besides Spanish, some of the Romance languages that use accents marks in their writing include French, Italian, and Portuguese.

The formal word for a graphic accent mark in Spanish is ‘tilde’; and the verb ‘to accentuate’ is ‘tildar’. However, as it was mentioned before, the word ‘acento’ is commonly used as a synonym for ‘tilde’.

The ‘acento gráfico’ (graphic accent) or ‘tilde’ in Castilian is an orthographic sign consisting of an oblique line from right to left (´) or small slash placed on vowels (á, é, í, ó, ú).

This is an important detail; the tilde always falls on the vowels so if you ever see a Spanish accent on a consonant, that is definitively a mistake.

Now, since Spanish is a phonetic language, meaning that you can read as long as you know how to pronounce each letter of the Spanish alphabet, the tilde works as a phonetic representation that visually informs the reader how to modify the sound of that letter or syllable.

The tilde simply stresses to the syllable where it falls!

It’s useful to remember that the ‘acento prosódico’ (prosodic accent) refers to the voice modulation in speech.

Whereas the ‘acento ortográfico’ (orthographic accent) refers to the spelling of the word in the written realm; thus is a graphic representation for the intonation.

When to use a Spanish Accent?

In Spanish, if one of the syllables in a word stands out when you pronounce it is called a ‘tonic word’ (palabra tónica).

The ‘tonic syllable’ (sílaba tónica) is the one that has greatest prominence because it carries the main change of pitch.

The best way to know where the tonic syllable falls is by, first memorizing the sound of each letter of the alphabet, and second, by pronouncing the word out loud.

Start by breaking a word into the syllables and play changing the stress from one syllable to another and see how it resonates with you.

Practice by changing the stress where the syllable appears in capital letters. The tonic syllable is underlined for your reference.

Some of these words may be proper names, adjectives, verbs, pronouns or adverbs.

But how do you know if they have a tilde or not? Well, there are four simple accentuation rules that you need to remember to excel at Spanish spelling.

These orthographic guidelines are based on the place that occupies the tonic syllable, so then again do not be afraid to practice them aloud.

There are exceptions where there are two vowels joined together and the accent serves to break the pair like in maíz (maize).

If the tonic syllable is the penultimate and the word DOES NOT end in a vowel or the letters –n and –s, then it is accentuated with a tilde.

These are always accentuated and the tonic syllable is the previous to the antepenultimate (forth syllable starting from the end). These are usually really long words so they are easy to spot!

A few things to remember:

What is the Spanish Diacritic Accent? 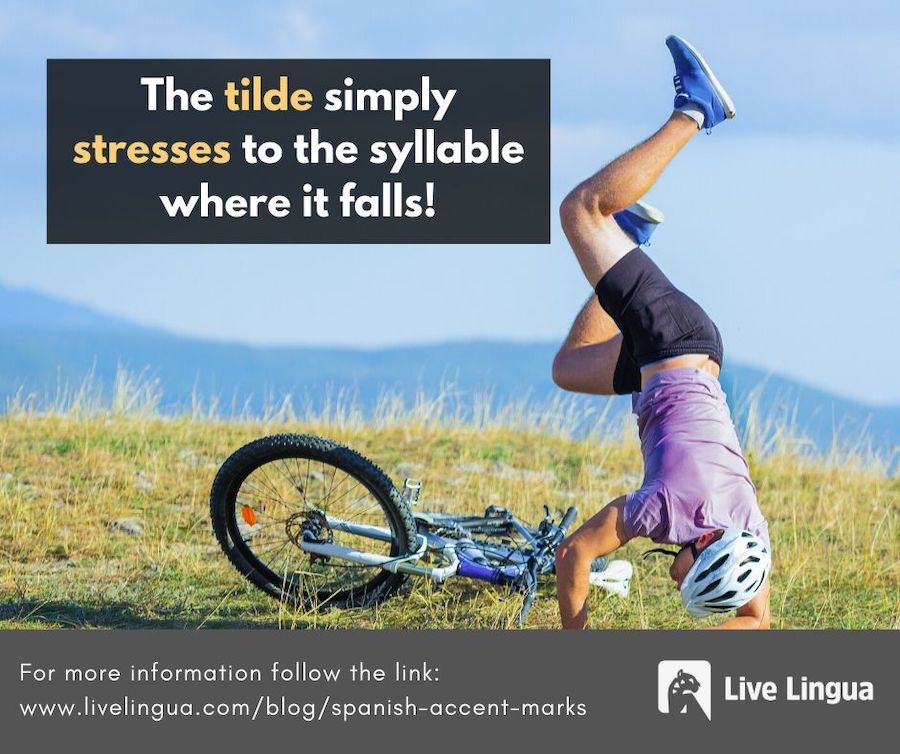 The ‘diacritic accent’ or ‘tilde diacrítica’ is a bit more complex because it doesn’t follow the above described rules.

Instead, it is used to distinguish two words, mainly monosyllables, which are written in the same way but actually mean different things.

Here is a list of common monosyllable words that use diacritic accent:

Apart from the tilde there are other symbols and letters used within the Spanish language:

The words que (what), cual (which), quien (who), como (how), cuanto (how much), cuando (when) y donde (where) are written with a diacritic accent when they are used in an interrogative or exclamative sentence.

A fantastic way to master the Spanish spelling rules and all things related to Spanish accents is to sign up for our FREE Spanish Survival Crash Course. Every day for six days, we’ll send learning guides and audio courses to your inbox, totally FREE!