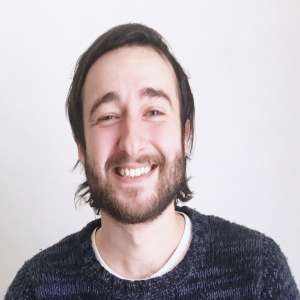 My name is Noe Paganotto. I'm half French half Argentinian. I grew up in France and when I was 20 years old I came to Argentina to find my origins and study my passion.

I hold a Qualification diploma of French language education at the french Alliance of Paris and a Literary Baccalaureate at Molière, Paris.

I have been teaching French since 2010. My method depends on the level of each student. I like to know the person's goals and motivations so I can adapt my lessons to their tastes and needs. For beginners I first approach the sounds of French to quickly begin to learn the different tenses of the language. My goal is to quickly put the student at ease so that we can train using talking exercises where we imagine different situations or by exchanging our opinions on different subjects. I always cover a little theory but it is immediately put into practice through exercises so that students can learn in a natural way and the student can improve the way he speaks while adding new vocabulary in every class. I like to feel that the student is having a good time while he/she is learning.

I like to go to the cinema, read books, edit videos and travel. Throughout the years I have visited Bolivia, Argentina, France, Belgium, Sweden, Spain, Portugal, Greece, Benin, Germany, Holland, Croatia, Scotland, and England.
So come on! Let's break the limits of language together! :)

They are originally from France and currently resides in Argentina.

Their Current Time Zone is:

They Can Teach These Specialized Courses:

They Can Teach The Following Age Groups:

Cinema, book and travel... I also love to edit videos