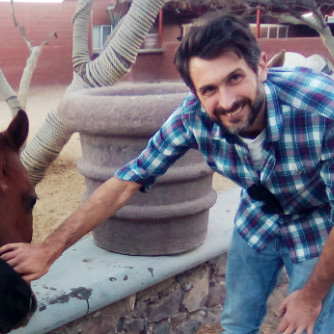 Born and raised in Cornwall, UK (home of the Pasty, Clotted Cream and the world’s best Fudge), Mat grew up on a small dairy farm on the coast. Farming was never Mat’s thing and as soon as he finished College he ventured off to London to study a BSc in Engineering, Science and Technology at London’s Brunel University.

Following a short spell working in the Telecommunications sector Mat decided to switch from Engineering to study a BA in Photomedia and Design Communications at Plymouth’s College of Art and Design. Having graduated he moved to London where he began working for a Production Company in Soho as a Graphic Designer and later as their Director of Live Events.

In late 2009 Mat moved to Querétaro, Mexico with his wife where they opened an organic kitchen and store which has kept him occupied up until 2017 when he started working for Live Lingua as their Class Coordinator. In this role Mat helps keep both our students and teachers happy by assisting them with any queries they may have and by ensuring our students are connected with the right teachers to meet their individual learning needs.

Having been able to see the inner workings of this truly pioneering online business has really widened Mat’s perspective on what a business can be.

DIY So finally the Engineering degree has paid dividends as now Mat is an all-round handy man around the house. So Mat gets bonus points with the kids when they break out their Lego.

Pool Shark: A clear sign of a misspent youth, Mat is a bit of a hustler. Well he did have the small advantage of having grown up playing snooker on his Granddad’s full size snooker table.

NOT BORN TO SING: Back in the day Mat had dreams of being the next Kurt Cobain (coincidentally they share the same birthday), but alas those dreams were not to be, my Dad did well in making it quite clear that my singing voice was atrociously lacking in tune.

BLINKER MODE: Mat is not a fan of being interrupted, and when he is performing any task he makes every effort to give it his all. This often means he unintentionally ignores everything else that is going on around him. Like his phone ringing, or his lunch that has gone cold.

One of Mat’s ancestors, like his great great great grandad was a guard to Queen Victoria in 1840 and assisted in protecting the Queen during the first of seven assassination attempts. Or so his historian Auntie tells him.

Mat has 17 years of experience in business and engineering.

He speaks 2 languages & knows some Cornish.

Has to take 4 vacations a year to stay sane.